We left the village early in the morning, as we planned to get to Bratang. I was still troubled by problems caused by food poisoning. Also, the atmosphere was quite grim after the quarrel which we had a day before. To add an additional we expected rain on that day. 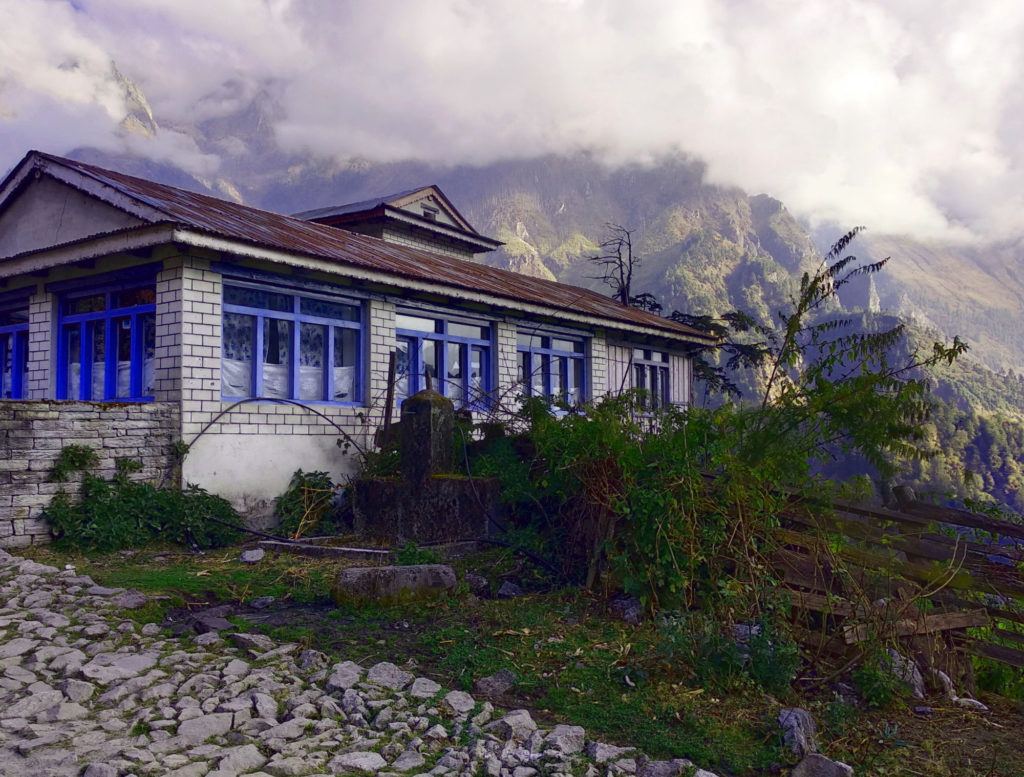 At the beginning we walked for some time to through the forest, then we started a short descent on a slippery, wet ground, which brought us to a bridge hanging over the valley. 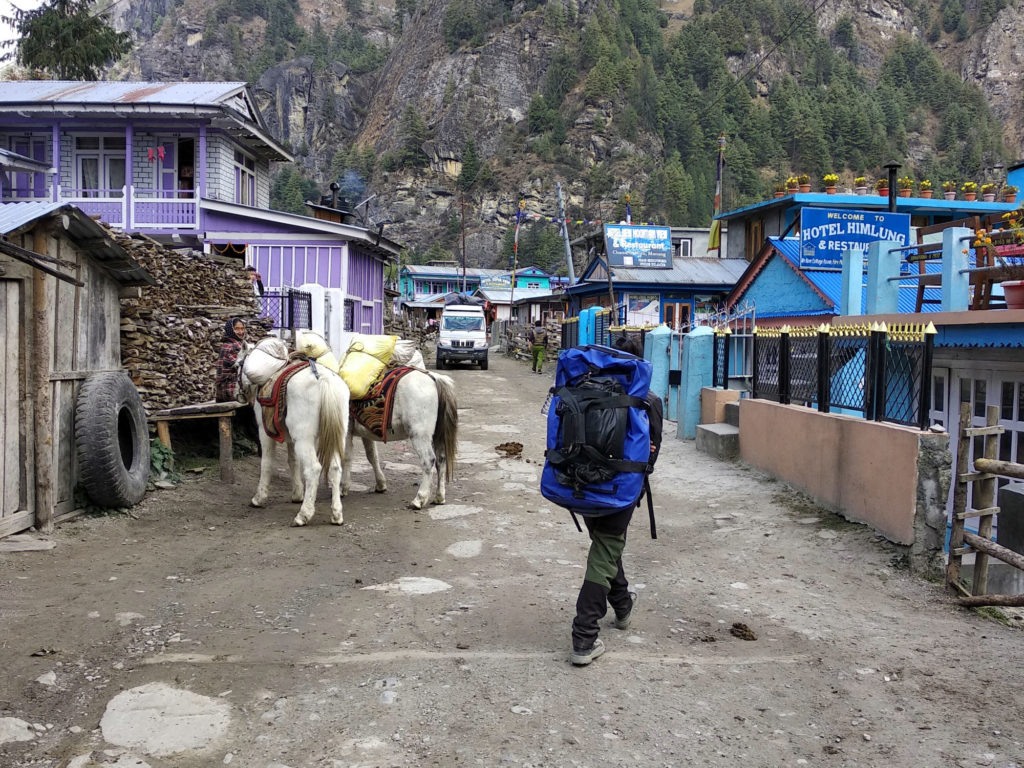 Before 12 a.m. we reached the village of Kurung where we had a shortstop for a lunch 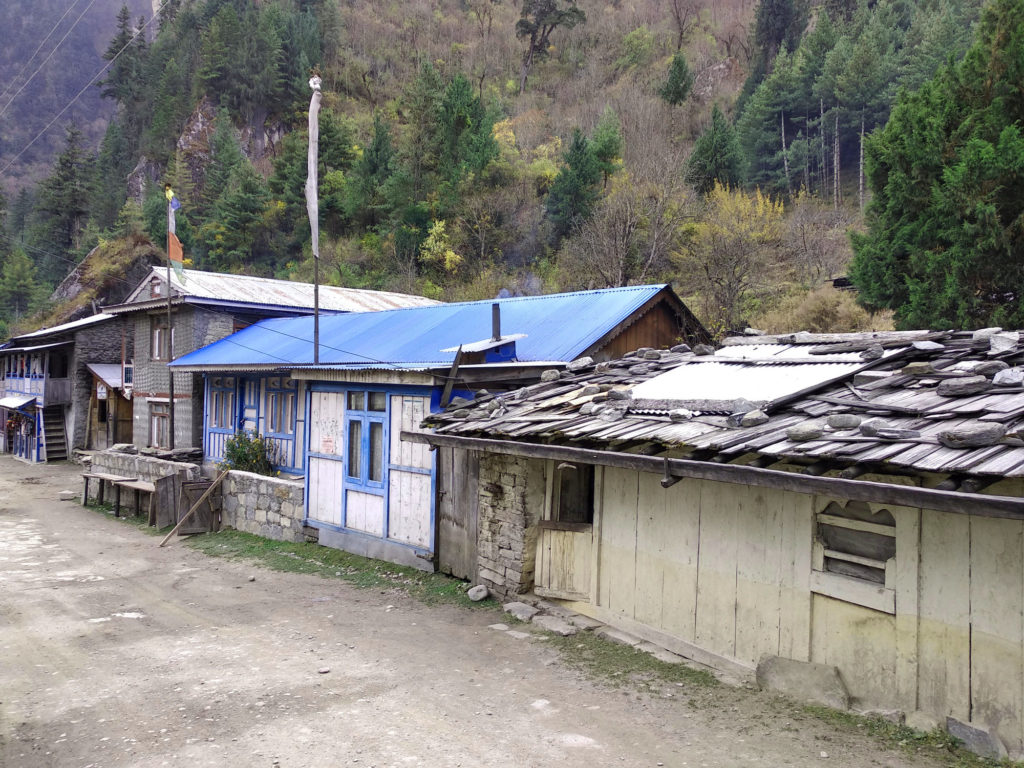 After some time we reached the town of Chame, which is a headquarters of Manang district. There we had a stop at the store with a hiking gear as Zosia and Szymon wanted to buy Su a backpack to replace a duffel bag that he was carrying. Fortunately, they were able to find one with appropriate size to accommodate all the gear. To reduce the price they left the bag, which was only a week old at the store.

After the purchase, they tried to repack the gear, and it took them some time. Meanwhile, small snow started falling. As we still had a few hours of walking left, we decided to leave Chame quickly. 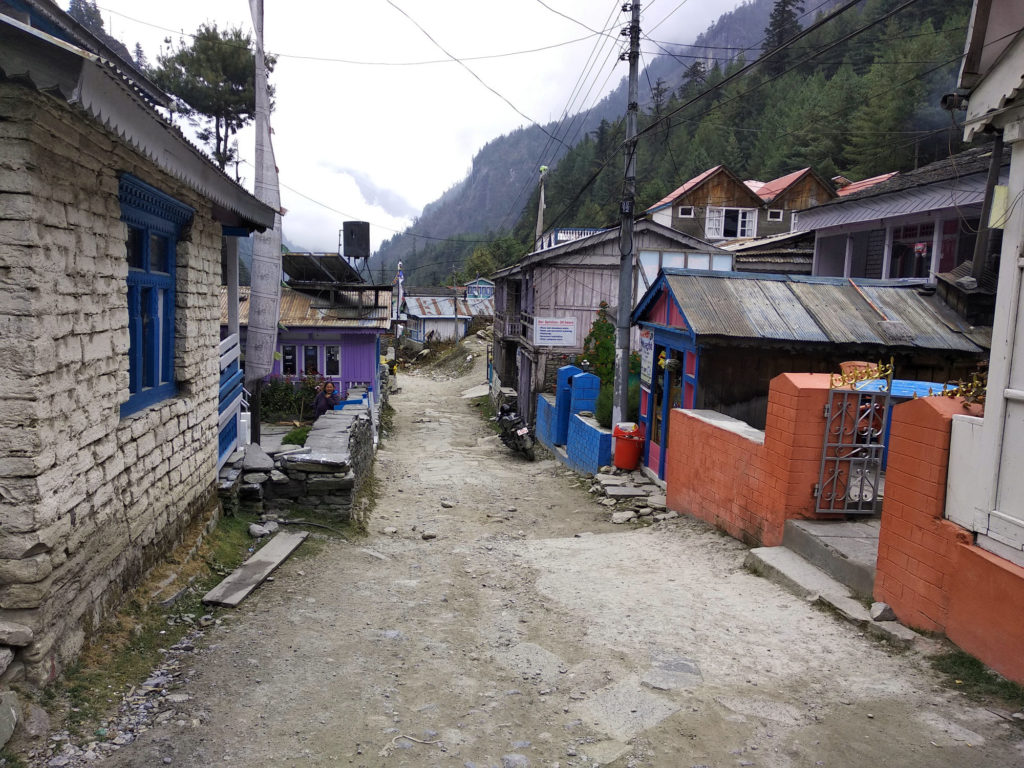 The weather gets worse

Unfortunately, just outside the town, the weather got much worse. The small snowfall turned into a little rain. But after a short time, the rain got much stronger. Fortunately, we were able to reach the village of Thaleku when the rain got really strong.

We decided to have a stop for a dinner there. While waiting for the meal we tried to think about possible options. The first option that we considered was continuing our walk if the weather would get better in a short time. The second idea was to take a jeep on the next day to morning to Manang as we already were behind our schedule due to visit to the school in Chamye. The third one was to get up early and walk to the village of Manang. The last option seemed impossible at the beginning, as the OpenStreet map showed a large overestimation of the required time. Fortunately, Su has told us, that there for sure is an error and we can reach Manang within one day walk.

As it was still raining when we finished dinner, we decided that the third option is the best one. We took our gear and we walked to the room.  Room again was very basic and had a wood finished interior. Fortunately, the room had a private bathroom with a European style toilet.

Just after entering the room Szymon has quickly fallen asleep while seating. Meanwhile, I again was trying to fix wounds on my feet. Later, while Szymon was still sleeping we decided to play volleyball over a middle bed. This allowed us to have some fun, and also we felt much warmer during this game. Of course, I was the one who won ;).

After taking some rest we headed to the dining room to order supper. Inside the room, there was a wood-burning stove. This stove allowed me to completely dry some of my clothes. Also, it was much warmer there in comparison to our room.

While waiting for a supper we again played the card game. Besides us, in the room, there was also Su and a couple from Korea with their guide. The Korean girl really seemed to like Nepales wine and she drunk probably too much of it. They were also interested in our game, but as the card had Polish descriptions they could not join us.

When the supper arrived we took a break from playing to enjoy our meal. After the meal, we played for over an hour before finishing the game. When we left the dining room we noticed that the rain has stopped. That was a great sign, which promised good weather for the next day.

We went to sleep knowing that the next day might be hard as we planned to get directly to Manang without a night in Pisang.